As much as we were all sad to leave Cambodia, we were very much looking forward to going to Vietnam. This involved a 12 hour journey with a stop off half way to cross the border.

A bit different to the crossing from Thailand to Cambodia, the Cambodia/Vietnam crossing was done with us carrying our bags ourselves and walking through. This is where I wish I’d packed lighter, as my backpack was killing me, but with a little adjustment courtesy of one of the boys in the group, I just about managed to do it without too much pain.

Currently, as a UK citizen, I didn’t require a visa for Vietnam, but I was still slightly panicking that they would change their mind by the time I got to the border, but then I panicked at every immigration point!

It took a while for us to get through, as we were a big group, and it was very hot that day, but once we all made it through, we jumped on to the bus to take us to our home stay in Can Tho.

On the way we stopped for lunch and I had my first taste of Pho, in the form of pho beef. It was really tasty, lots of flavours in the broth, but with so much liquid I was soon full up! 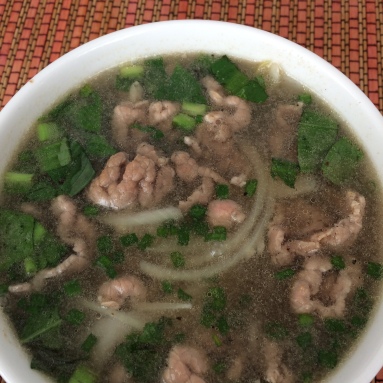 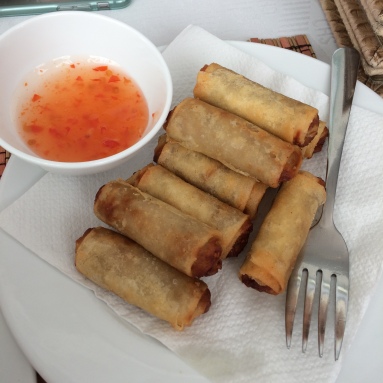 Another short journey, and a wrong turn, and we arrived at our home stay, where we would have a traditional meal and stay the night.

It was in the middle of the countryside so it was quite noisy with all the nature around us, not to mention the mosquitos. The rooms were very basic, a bed each with a mosquito net around, lights and a fan, we also had the luxury of wifi too! I forgot to take a picture of the bedrooms, but I will see if any of the other guys took one and then add it too the post later.

For dinner we were treated to a little cookery demonstration of how to make the Vietnamese rice pancakes filled with shrimp, pork and bean sprouts. To go with the pancakes we were served a selection of dishes included Spring rolls, pumpkin soup, a beef dish and rice. 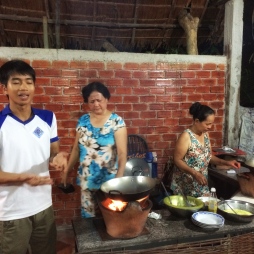 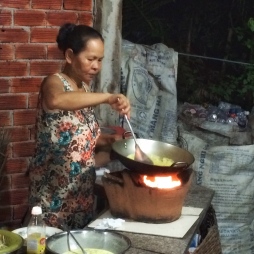 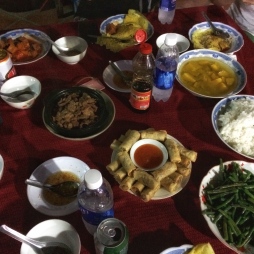 There was so much food, and it was all very good, think the feeling was to eat your way to a food coma so you slept better.

Unfortunately, it didn’t work for me. I found it difficult to sleep even with my earplugs in, as the nature noises were just freaking me out, which was triggered by a very loud noise on the roof of our room, which in the morning we discovered was a very large rat!

By this point, I was just so exhausted and looking forward to the hotel in Ho Chi Minh City.